fixed, but not really

Over the last several months, I've noticed a number of locations where street lights are on all the time - on Longwood from 95th to 97th, westbound along 97th from Longwood, and in other spots. Eventually they go dark and aren't on at all. Then they get "fixed" and are on 24/7 again.

This has been a problem since the "upgrade" about a year ago, when many street lights that had been dark for a long time were relit, and all the street lights in our area got brighter. We really didn't need brighter lights or the increased light pollution that came with that increase in brightness. 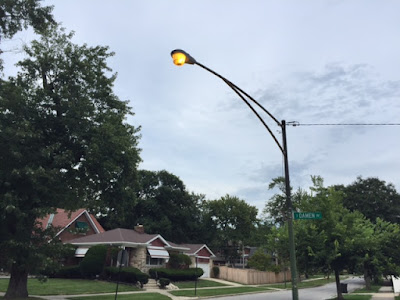 When I see these lights on continuously for weeks and months at a time, I have to wonder how many thousands of taxpayer dollars are wasted on this unneeded use of electricity. How much extra pollution is generated in the creation of this electricity? Did a bunch of faulty sensors get installed, or is there another reason?

Variations on a theme - the original is a psychedelic classic.  I present 3 versions: John Lennon's interpretation, a funk-inflected version and a later rock interpretation.

The idea of coming together is a welcome one right now in this era of conflicts.

If you never learned to ride a bike, or you haven't ridden in a long time and want to get back up to speed, this free one-time class is for you.

Chicago Department of Transportation's Bicycling Ambassadors will teach the classes. Divvy bikes will be provided as loaners for those who don't bring their own bikes. Attendees will receive *FREE* helmets.

You MUST make a reservation to attend a class to make sure there are enough instructors available. Please call anytime before the class to reserve your space at 312-744-8147.

Friends of the Major Taylor Trail meeting on Wed. 8/17

For those who aren't familiar with our group and what we do, we are a non-profit advocacy group working to improve and maintain the Major Taylor Trail and promote its use. We have an active working relationship with the Chicago Park District, Forest Preserve District of Cook County, Openlands and other non-profits and government agencies. We organize volunteer workdays, bike rides and other events.

We'd love to have your ideas and help with future events and projects. Please join us! Everyone is welcome.
Posted by Fargo at 6:59 AM No comments:

Thanks to Cook County Commissioner Stanley Moore for his efforts to secure a contract with the Bike and Roll  bike rental company that started a rental operation in Dan Ryan Woods late last summer. Commissioner Moore has worked to create more recreational opportunities in communities of color.

“It is critical that we continue to push for recreational programs on the Southside of Chicago. Cycling is a fun outdoor activity that will attract residents and better connect them to our forest preserves,” said Commissioner Moore. “The Dan Ryan Woods is a widely used forest preserve that should have as many amenities as possible and by providing a bike rental option, residents can have a unique experience that helps them explore our natural open space without traveling far from the inner-city.”

Up to ten bicycles will be available at Dan Ryan Woods for hourly or daily rental with credit, debit and prepaid cards. Rates begin at $7 per hour or $28 per day. Options include kids bikes, tag-along and wagon attachments, baby seats, and small and large quadcycles. You can find the rental concession adjacent to the parking lot on the south side of 83rd St. between Western and Damen, close to the north end of the Major Taylor Trail.
Posted by Fargo at 6:11 AM No comments:

A new collaboration between Kurt Elling and Branford Marsalis.

a loss in the neighborhood

I was sorry to hear the sad news about the passing of Alderman O'Shea's mother.  My sympathy to Matt O'Shea and his family.
Posted by Fargo at 9:05 AM No comments:

On Aug. 1 (today), the second phase of the City of Chicago's Plastic Bag Ban will be implemented and enforced. Smaller chain and franchise retailers with floor space less than 10,000 square feet will be required to come into compliance. Stores that provided its customers with carryout bags before the ban will only be able to provide reusable bags, recyclable paper bags or commercially compostable plastic bags.

The ban does not apply to any dine-in or take-out restaurant or small independent or non-franchise stores.

The City's Department of Business Affairs and Consumer Protection will host a workshop regarding the new laws Wed. 8/10, 3 to 4:30 p.m., City Hall, Room 805.