more wildlife in the neighborhood

I wrote recently about red foxes in Beverly and Morgan Park. My significant other, a neighbor, and others have spotted larger carnivores around the neighborhood.

This morning, my S.O. and our next door neighbor both spotted a large animal running down Damen and around the corner onto 97th St. moving fairly fast. It was the size of a large German shepherd, with a thick coat and long legs, but the head and coloring were definitely NOT that of a German shepherd. This big guy looked like a wolf, although it might have been a wolf-dog hybrid. More on wolves here.

Wolf sightings are fairly rare in Illinois, but since we've seen cougars and all sorts of other wildlife here in recent years, as well as an increase in the deer population, it's not outside the realm of possibility.

In the last few years, coyotes have been seen in many parts of the Chicago area, and even in the Loop. They're seen in the Dan Ryan Woods and adjacent areas on a regular basis now.

We've been seeing a lot fewer rabbits and squirrels in recent months. These guys are probably the reason why.

Here are a few safety tips for coyotes, that you should also keep in mind for wolves as far as your pets are concerned. Wolves and coyotes don't normally approach people. If one does approach you, don't turn around and run, which would make you look like potential prey. Stay calm, back away slowly, and try to frighten it with loud noises. It is probably more frightened than you are.
Posted by Fargo at 1:17 PM No comments: Don't put your bike away for the winter quite yet. Join us for a holiday lights bike ride on Saturday 12/12. We'll meet at Blue Moon, 1742 W. 99th St., at 5 p.m. Stop by early for hot drinks and some of Caroline's sweets. The ride will be 5-10 miles (depending on weather) at a leisurely pace.

Feel free to decorate your bike and/or yourself if you're so inclined. We'll enjoy some of the best holiday light displays in the neighborhood. If enough people decorate their bikes, we become part of the show.

Headlight and tail light are REQUIRED so we all have a safer ride. Don't have lights? You can always stop by Beverly Bike & Ski to pick up some before the ride.

Need a few tips for riding comfortably in winter? Check out the Bike Winter web site. See you at Blue Moon!
Posted by Fargo at 11:06 PM No comments: 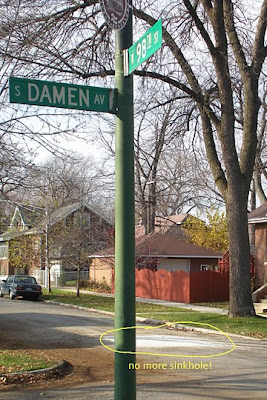 For many months, there has been a sinkhole in the middle of 98th - not a huge one, but large enough that a small child or small dog could possibly fall into it.

Streets & San's answer: one traffic cone, then a construction horse. The horse was run over countless times and picked up again. More 311 calls. No repairs. I was starting to think that it wouldn't get fixed this year and that it would cave in at some point over the winter.

I was ready to start another round of 311 calls. One day last week I took a walk and was amazed to discover that all the 311 calls that I and many others have made were finally answered. It's fixed! Yeah!!! 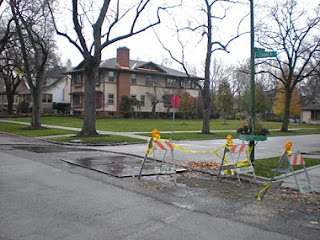 Maybe one of these days the Peoples Gas will return to fix the mess they left us with at 96th & Damen. That would be a lovely holiday gift to the neighborhood.

Chicagoans and visitors alike are invited to sing along and enjoy complimentary coffee and hot cider courtesy of Caribou Coffee. Caroling at Cloud Gate is supported by the Comer Foundation.

On Sunday 12/6, take a candlelight house walk through historic Pullman from 3:30-6:00pm.
Tour select Pullman homes decorated for the holidays, then enjoy a light holiday buffet and silent auction at the Visitor Center. Reservations are required. Call 773.785.8901 for reservations/info.
Posted by Fargo at 6:12 AM 1 comment:

The Beverly All Stars will be appearing tomorrow evening, November 25, at a "WMC Farewell Concert" from 6:30pm to 10:30. This concert will feature several musical acts which have appeared at World Music Company over the years. The Beverly All Stars will be onstage for a few tunes, probably earlier in the evening. The proceeds from this event will help to reduce the financial deficit of the not-for-profit organization which is departing 1808 W. 103rd St. at the end of this month. We've heard sketchy details through the grapevine about a new music organization which may take over the WMC space starting next month. Stay tuned for more info about the new tenant and what's next for the Beverly All Stars.
Posted by Fargo at 1:49 PM No comments:

Para Toda La Vida
Posted by Fargo at 6:36 AM No comments:

java and jazz at Blue Moon

Need a jazz fix this Friday night? Come on down to Blue Moon. Emanon TME will be playing at 7 p.m.
Posted by Fargo at 6:34 AM No comments:

My ancient car wasn't getting much use and had reached the point where the $$$ needed to make it reliable and safe again weren't easily justified. I was talking recently with friends who live in places where sprawl is the norm and getting anywhere without a car is impossible. At times I felt like I might as well be talking to someone on Pluto.

In most parts of the Chicago, bikes and public transit can get us around pretty well. Public transit has been a priority in my choice of jobs. I would not accept a job in a location where bikes or public transit are not a viable commute option.

For me, the answer "just buy a new one" doesn't sit well. A lot of resources go into making a car and transporting it to a dealer. A lot of energy is consumed by the average car during its lifetime. A lot of time and money are spent on getting a car to and from the mechanic and getting it serviced. I've experimented with how to get by without, using bike, bike plus trailer and public transit. Now that we have an I-Go location in Beverly, it's a lot easier when a car is the only workable answer. (Thank you, I-Go!)

One friend, who drives a Chevy Suburban, pushes the idea of an SUV or crossover. Putting another SUV behemoth on the roads is definitely not the answer for me. I don't believe that putting more tanks out there makes the roads safer.

In car-pedestrian accidents, the pedestrian is much more likely to die or be severely injured if hit by an SUV than by an average-sized car. Studies are being done to modify designs to improve pedestrian safety, but that doesn't change basic physics: force of impact is directly proportional to the weight of the object. Heavier, taller vehicles hit with more force in ways that are harder to survive. They make the roads less safe for pedestrians, cyclists, occupants of smaller cars, etc.

I've donated the car to charity. It's nice to have more room in the garage and free up money for other things. Even though I haven't had a car payment in years, the cost of insurance, license plate, city sticker, gas and minimal maintenance adds up. That's roughly $800-1000 a year that I can spend on other things. That money will more than pay for as many Metra, CTA I-Go and Pace trips as I need to take, with cash to spare for bike maintenance. Having one less car in traffic is a beautiful thing.
Posted by Fargo at 9:46 AM No comments:

This will be their last night at World Music Company, as fundraising efforts have not been enough to counter the effect on the loss of students due to the economy. I'll be sorry to see them go.

I just got a report of a disturbing incident that happened in Ridge Park this morning. Two teenage thugs robbed three people at gunpoint in the playground area around 10:30 a.m. The victims were a couple with their toddler nearby, and another person.

Keep your eyes and ears open and be aware of your surroundings. Look like you're walking with a purpose, not appearing to be lost or confused. If someone approaching you seems threatening or suspicious, cross the street or otherwise get away from that person. If more of us are out on the street, we're all safer.

I hate to say it, but as someone who has been robbed at gunpoint in an unlikely location (in another neighborhood), I've seen enough evidence that incidents like this can happen anywhere.
Posted by Fargo at 4:44 PM No comments:

winter farmers market and brunch on 11/14

Here's a bit of visual humor for your Saturday. No, I'm not ready for snow yet. They've gotten some in Colorado already, but I don't want to see it here anytime soon.
Posted by Fargo at 6:12 AM No comments:

The Green Sanctuary Group of Beverly Unitarian Church will collect household hazardous waste and electronics for recycling Sat. 11/7, 8:30 to 10 a.m. in the church parking lot, 10244 S. Longwood Dr. (the Castle). Modest contributions to help offset transportation costs are appreciated. Collections are scheduled on the first Saturday of Feb., May, Aug. and Nov. For more information, call 773-233-7080.
Posted by Fargo at 7:07 PM No comments:

Recently, I've heard the unfortunately news that World Music Company may be closing. It's sad to see a fine neighborhood non-profit so adversely affected by the economy.

They have been fundraising, but they're not out of the woods yet. Please come out and support them, and make a donation if you can. If it's possible to keep the place open, I'd love to see that happen. Get info on scheduled performances or make donations here.

a way to help balance the city budget

What do you think of this idea? I think it's a great one. For more background, read through posts here. 25 less rubber stampers. Millions saved. The fact that aldermen have continued to approve raises for themselves over the last few years while other city employees have faced layoffs and unpaid furlough days is nervy, to say the least.

Here's a link to the petition. If you want to gather any signatures, keep in mind that they have to be sent in next week. Here's the info on where to send 'em:

Send completed AND notarized petitions to:

Appropriate postage, no certified or registered mail, no page numbering, and a standard 8.5 by 11 printed page. Include contact info in the return address or a self addressed envelope or postcard for receipt info.

Signers must be registered voters, living in Chicago, listing their actual voting address.

Petitions have to be in Sgt. Northen's possession prior to 15 November as the filing deadline is 16 November. Remember that 11/11, Veterans Day, is a postal holiday, so mailing by 11/10 is recommended.
Posted by Fargo at 10:24 AM No comments: