do you want to see bike routes in the 19th ward?

With the addition of dockless bike share in our ward, Alderman O'Shea seems more open to the idea of creating bike routes to encourage more bike riding and more use of the dockless bikes.  This is a welcome opportunity to give input on a set of bike route ideas that were developed by CDOT during the initial round of public outreach for the Streets for Cycling Plan 2020.

The plan includes different types of routes, ranging from neighborhood greenways (for residential streets) to protected bike lanes on major streets like Vincennes.

Better conditions for riding can encourage development and growth of Safe Routes to School programs so that more kids can walk and bike safely to neighborhood schools. We've all seen how crazy and dangerous streets around schools can be around drop-off and pick-up times. Conditions can be hazardous for the kids themselves, for neighbors, and for anyone who needs to pass through those areas or streets that parents use to get there. I'm sure that many of you have seen the huge difference in morning and afternoon traffic volumes between weekdays when schools are in session and summer weekdays. Walking and biking without all that additional traffic is much safer and more pleasant.

If a lot more kids are walking and biking instead of being driven to school, it's a valuable opportunity for them to learn about navigating their neighborhood, street safety, decision making, and the environment around them. It creates a foundation for many basic life skills.

One of the benefits that many communities have seen from more people getting around by bike instead of car is a boost to neighborhood business districts. As long as there's a place to lock up bikes, and it's a place people can easily reach by bike, studies have shown that making streets more bike friendly can increase revenues. Local and regional bike touring bring more business once the word gets out that riding conditions are good.

Bike rides to visit craft breweries are increasingly popular. Those riders may visit other businesses along the way, in addition to breweries and brewpubs. Attracting a large bike group can bring $$$$ to our business districts. Businesses can serve a lot more customers if they're coming by bike instead of needing a lot of parking spaces. Unique businesses can make a neighborhood a popular destination.

You can take the survey here. The first map below shows an overview of the whole ward, while the 5 areas in smaller detail maps correspond to questions in the survey. 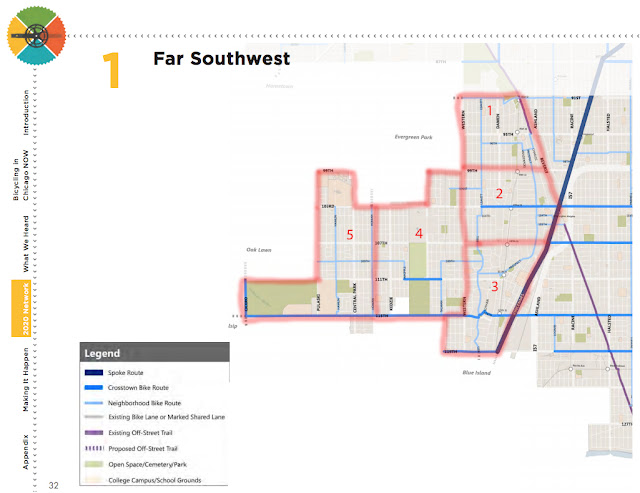 The survey will be open until 10/31.  We hope that you'll spend a few minutes to take it.

If there are streets in the ward where you would like to be able to ride but you don't because conditions are too dangerous, please include that in comments.
Posted by Fargo at 6:57 AM 1 comment:

It's happening this Saturday from noon to 7 pm. Event map and program information here.

a big thank you

Thank you to Southwest Chicago Diversity Collaborative and Beverly Area Arts Alliance for making yesterday's Terrain Fest possible. It was a great day. 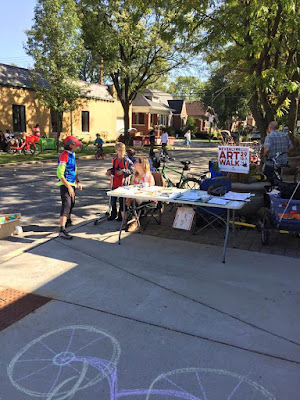 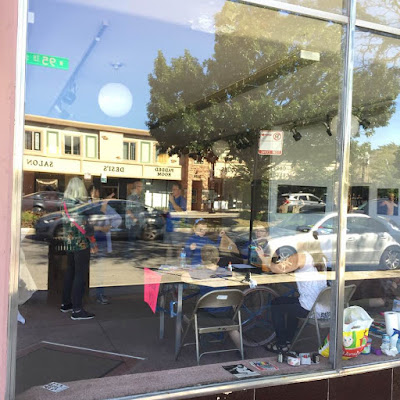 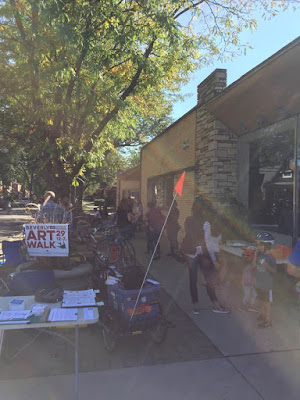 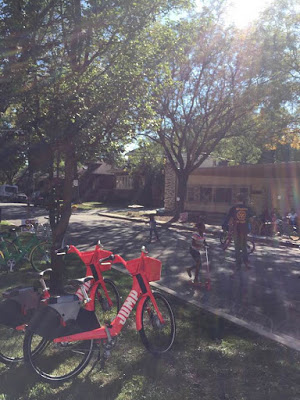 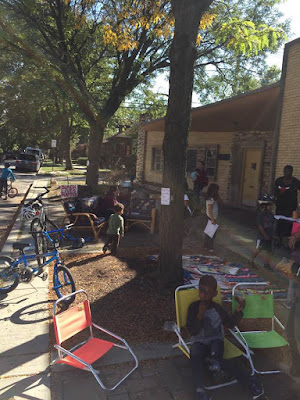 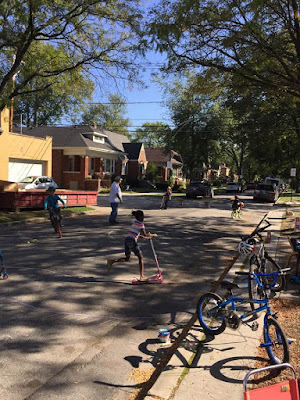 Come out for Terrain Fest on Sunday afternoon 9/23 from 2:00-4:30 pm. It's happening at 95th and Hamilton in conjunction with Beverly Art Walk artist studio tours.

If you are interested in seeing bike routes developed in the 19th ward, come out and see a map of proposed ideas and do a survey to let CDOT know where you want bike routes.

Parents - bring your kids with their bikes and helmets to learn about riding smart and safe.

Thanks to Beverly Bike & Ski, we will have a bike safety check. Stop by and get it checked out.

Here's more info about the Artist Studio Tours happening from noon to 5:00 pm on the same date. We highly recommend biking between studios. 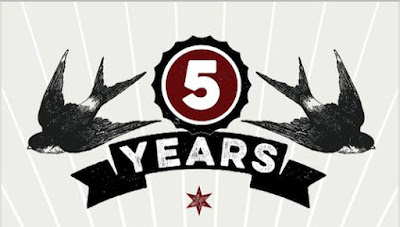 Grooving into a Friday vacation day.... Have a great weekend!

If you're interested learning more about future events and helping to work for better conditions on the Major Taylor Trail, please join us on Monday night (9/17, 7 to 8:30 pm) at Ridge Park fieldhouse.

https://www.thechainlink.org/events/friends-of-the-major-taylor-trail-meeting-732
Posted by Fargo at 4:17 PM No comments:

Do you know how to avoid dooring crashes?

Fear of dooring is one of the motivations for this.  It's one of the most common causes for bike crashes. News stories like this one help to reinforce that fear. Whether you have a lot of riding experience or you're a newbie, do you know all the things you can legally do to avoid getting doored?

1. Look through the rear window of the car to see if you can spot someone in the car. This isn't always possible due to things like tinted windows, glare and big headrests, but it's a good starting point. 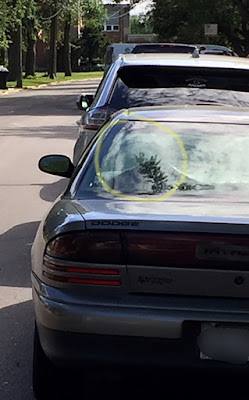 2. When possible, especially in situations where it's your only safe option, ride 3 feet or further out into the traffic lane, outside the door zone. This is called "taking the lane" and it is legal when riding closer to the curb is unsafe. Where we have bike lanes, the best designs create a buffer space between parked cars and bike traffic, as in this example. 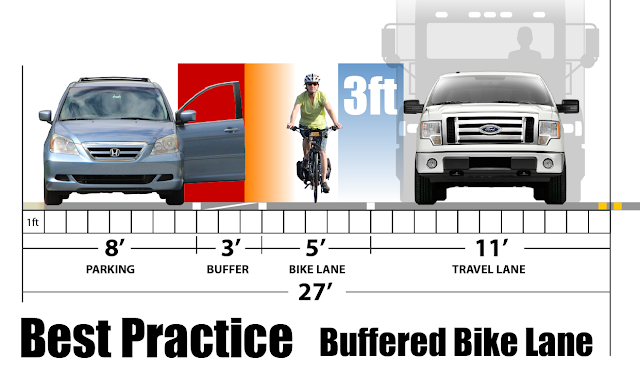 Where there are no bike lanes, having shared lane markings and signs can remind drivers that we have a legal right to the road. 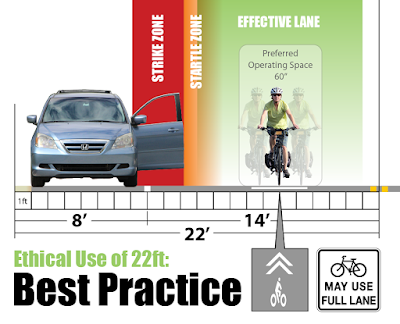 3. Scan the tail lights of parked cars ahead and watch for brake lights turning off.  If someone has just taken their foot off the brake, they may open the door very soon afterwards. 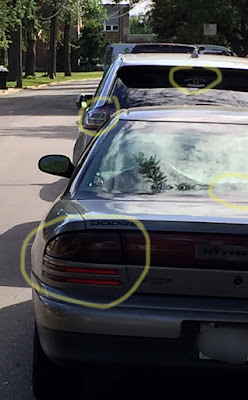 4. Scan the side mirrors of parked cars ahead and look for a face or signs of movement. This can also warn of a door that's about to open. 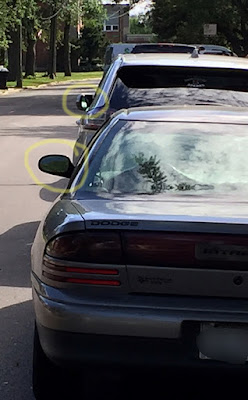 5. f you see a door opening, call out "wait!" or "stop!"  The driver will often pause and look, and they will usually wait for you to pass before fully opening their door.

In combination with the ideas above, one of the best things you can do is ride as often as possible, even if it's only 1 or 2 miles per trip. Riding more often builds your skill level and confidence on the bike. When your riding skills are more solid, it's easier to pay attention to signs that may warn of a potential dooring, because your attention isn't focused on operating the bike.

Take care and ride safe. If more of us are out there on bikes, drivers get more used to watching for us.

getting up to speed

Getting up to speed isn’t always about going as fast as possible. Sometimes it’s good to do a refresher on rules of the road. Laws change over time, so what we learned years ago isn’t necessarily the same as current laws. Going back and reviewing from time to time may also help us break bad habits.

I see evidence every day that doing this would be relevant for many drivers. A few days ago I was riding my bike on Longwood Dr. A driver zoomed up from behind me, shrieking “Get out the street! Get out the street!” I’ve heard clueless things said by lots of drivers like her who seem unaware of state laws giving cyclists the same rights as drivers on the vast majority of streets.

Too many seem equally unaware of the Chicago law requiring cyclists 12 and older to be on the street, not on the sidewalk, unless it's a location where the sidewalk is designated as a trail. This is for pedestrian safety. Grandma will thank you. Laws on this subject vary by municipality. Many suburbs allow riding on the sidewalk except in business districts or other areas where signage prohibits sidewalk riding.

If you’re driving, there are a few important bike-related laws you should know. Illinois and most other states have a 3 foot passing law, requiring you to move far enough to the left of a cyclist to leave 3 feet or more between your vehicle and the bicycle when passing.

When you are parked, opening your door into traffic make cause a serious injury or fatality for a passing cyclist. It's happened to me. I turned a corner and encountered an illegally parked car at the crosswalk. The driver flung his door open and knocked me sideways, flying off the bike into evening rush hour traffic onto my tailbone. The woman driving behind me hit the brakes and put on her flashers, blocking cars behind her from hitting me. Some people aren’t as lucky when they get doored.

This is why there is a state law requiring drivers to look before opening their doors and wait until the lane is clear before doing so if there is approaching traffic. Looking before opening your door can help to prevent tragedies like this one in Pilsen last week.

(625 ILCS 5/11-1407) (from Ch. 95 1/2, par. 11-1407) Sec. 11-1407. Opening and closing vehicle doors. No person shall open the door of a vehicle on the side available to moving traffic unless and until it is reasonably safe to do so, and can be done without interfering with the movement of other traffic, nor shall any person leave a door open on the side of a vehicle available to moving traffic for a period of time longer than necessary to load or unload passengers.

A new bill was just passed adding the Dutch reach technique to Rules of the Road and adding bike safety questions to the state driver’s license exam.

If you see someone on a bike using hand signals and there hasn't been any unfriendly exchange to provoke hostile gestures, pay attention. They're probably trying to tell you that they're stopping or turning.

If you're the one who's going to turn and there are no cars in sight, it's still a good idea to use your turn signals if there's a pedestrian or cyclist who may be affected by your turning movement. They need to know if you're turning. That critical bit of information may save that person's life or prevent serious injuries.

Illinois and most states have laws requiring drivers to stop or yield to pedestrians in crosswalks. A while back I wrote about an incident I witnessed on 99th St. where a driver  was trying to intimidate a group of moms and kids who were crossing the street in front of All Day Montessori.

A driver who uses their vehicle to threaten a vulnerable road user (pedestrian or cyclist) or deliberately or recklessly hits and injures them may be charged with vehicular assault.

Driving is a privilege, not a right. To deserve that privilege, it’s our individual responsibility as drivers to stay up to date on current laws. Anyone who choses to be ignorant of laws threatens the safety of others and should not be driving a motor vehicle.