A touch of New Orleans for your Friday... 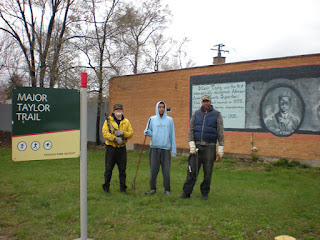 Please join the Friends of the Major Taylor Trail and TreeKeepers for a community trail clean-up workday on Saturday 3/31. 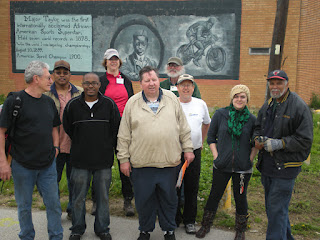 We will meet at the Major Taylor mural (north side of 111th St., where the trail crosses the street) and work from 2-4 p.m.

We welcome community participation in clearing small trees and brush to minimize trail blockage from summer growth, as well as improving sightlines along the trail.  Long sleeves, long pants and enclosed boots or shoes are strongly recommended.  If you have work gloves, please bring them.  Some gloves and tools will be available.  Our work area will be on the trail between 111th and 115th, starting from 111th St.  We hope to see you there.
Posted by Fargo at 12:48 PM No comments:

what's missing from the garden?

This morning I was finishing my spring clean-up of last season's overwintered plant growth and made a disappointing discovery.   Until last night, a new indentation in one of our garden beds contained a large, well-established echinacea.

Now, instead of having this to look forward to in the summer, 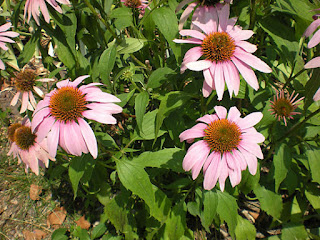 we have this hole. 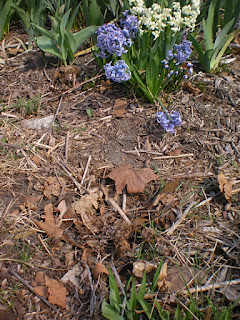 This wasn't an expensive plant, just one I've nurtured for years.  Why do people need to be so scummy?

Last night we witnessed a rather brazen drug transaction on 97th St.  A 30ish white man (pale complexion, short light brown hair, brown backpack, average height) was walking VERY slowly along one side of 97th.  His female companion (didn't get a good look at her - both were scruffy and white) also walked very slowly, parallel to him, on the opposite side of the street.  They kept stopping, looking back and looking back, all the way from east of Damen over to Hoyne.

When they got close to Hoyne, a young black man (light-medium complexion, thin, maybe 13-14) wearing a white t-shirt, carrying a white t-shirt (biting one corner in his mouth and letting it hang down) and riding a bike caught up on them from behind.  He appeared to be the look-out.  He was followed by a group of young black men (all with dark complexions, perhaps 18-19) wearing plain white t-shirts, riding in a silver Chevy Impala.

They pulled up to the white man - their buyer - made their transaction and drove off.  Lovely.  We briefly saw similar drug transactions around here a few years ago and managed to drive them away by looking for them and calling 911.  I hope we can turn this into a similarly short-lived pattern.
Posted by Fargo at 6:01 AM No comments:

Some Monkees silliness for your Friday. Cheers!

the tree butcher of Ridge Park

I was disappointed to learn over the weekend that the tree butcher who mutilated several trees in Ridge Park last year has struck again.  The little hawthorn trees near the playground got a hefty amount of unauthorized pruning from an unknown person.  Entire branches and trunks were severed, leaving rough stumps.  Park district staff aren't thrilled about it.  Neither are TreeKeepers volunteers and folks in the neighborhood who enjoyed the natural beauty of these trees before the tree vigilante returned.

I got TreeKeeper training from professional arborists.  One of the lessons I learned was that trimming more than 1/3 of potential foliage from a tree in a single growing puts stress on the tree, causing abnormal growth patterns as the tree struggles to make up for the energy-generating capacity that was lost.  Some of these trees had as much as 1/2 to 2/3 of their potential foliage removed in a single day, creating extreme stress and making them more vulnerable to disease.  The growth that was removed will never return in any sort of natural, healthy form.  The trees will grow new branches, but they will never look normal again. 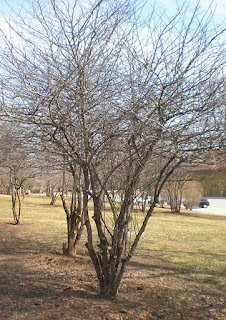 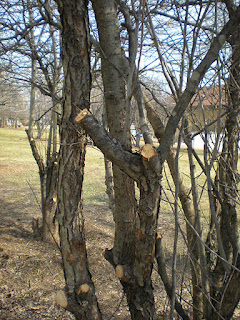 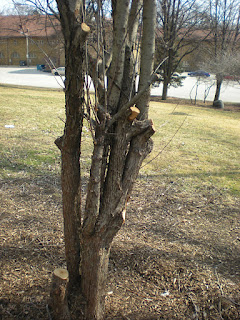 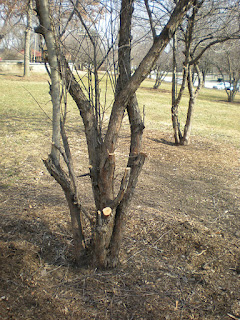 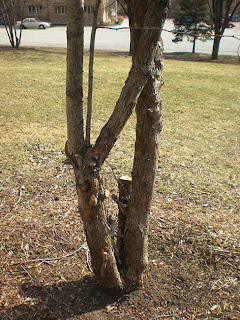 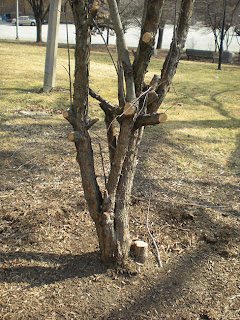 The mutilated trees shown above were much fuller before, more like the trees in the picture below. 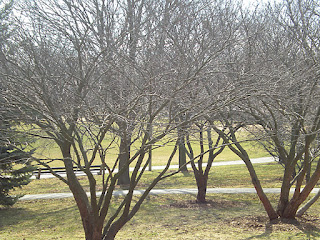 The trees shown below (near the corner of the parking lot) were mutilated last year, presumably by the same person. 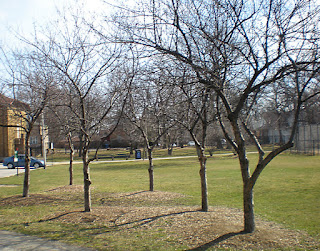 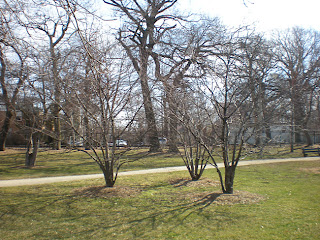 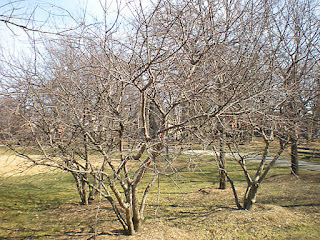 ... and not like the trees below, also mutilated last year, next to one of the baseball fields. 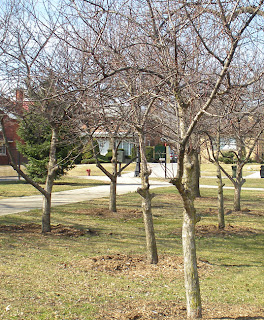 To whoever is doing this, please STOP NOW!!!  Don't cut ANY more trees in this park or any other park.

These trees belong to all of us.  Your actions have damaged the health of many formerly beautiful little trees and deprived us all of their former beauty.  Please leave the pruning work to those who have proper training.

If you see someone cutting trees who is not a park district employee or TreeKeeper volunteer, please report them to park district staff or the police before they can do any more damage.
Posted by Fargo at 10:30 AM 4 comments:

a threat in your wallet?

Do you have any credit or debit cards with RFID chips in your wallet?  If you're not sure, do you know how to recognize these cards?  This video explains how and describes a disturbing crime trend which is significant and growing here in the Chicago area.

This could happen to you - on the street, in a mall, on a train.  Some credit card companies do a better job than others in flagging fraudulent transactions.  Wishing you a safe year with no credit or debit card fraud.
Posted by Fargo at 7:16 PM No comments:

careful with that 'cue!

With the recent lack of rain and snow (for weeks and weeks now), even last week's rain only made a small dent in the deficit.  It's really dry, folks, freakishly dry for this time of year.  The National Weather Service has issued this warning:

... RED FLAG WARNING IN EFFECT FROM 11 AM CST /NOON EST/ THIS MORNING TO 6 PM CST /7 PM EST/ THIS EVENING FOR LOW RELATIVE HUMIDITY AND STRONG WINDS FOR NORTHERN ILLINOIS AND NORTHWEST INDIANA...

* AFFECTED AREA... ALL OF NORTH CENTRAL AND NORTHEAST ILLINOIS ALONG WITH NORTHWEST INDIANA.

* IMPACTS... CONDITIONS WILL BE FAVORABLE FOR THE RAPID GROWTH OF WILD FIRES.

With the warmer weather, an accidental spark from a backyard barbecue or a cigarette could have a much greater impact than is normal for this time of year.
Posted by Fargo at 8:51 AM No comments:

Don't forget to turn your clocks ahead by one hour on Saturday night/Sunday morning for Daylight Savings Time. 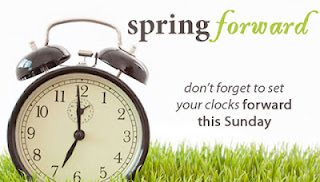 Marine Cpl. Conner Lowry of Beverly is being remembered today, as his body arrives home from Afghanistan.  We offer a virtual salute and our sympathy to his family and friends. 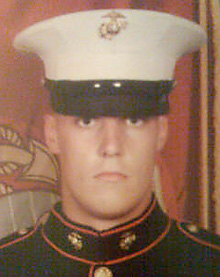 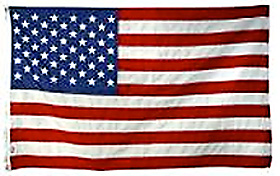 For further info on this morning's procession from Midway Airport to St. John Fisher Church and funeral services, click here.
Posted by Fargo at 8:55 AM No comments:

Chicago residents can receive rebates of up to 50% on locally purchased trees, native plants, compost bins and rain barrels through the Sustainable Backyard Program. Learn more about incentives for creating an environmentally friendly landscape and find rebate forms here.  What a great way to start your spring yard improvements! 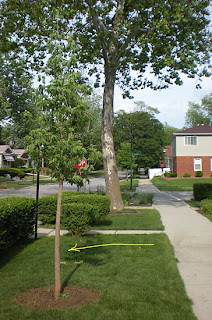 blast from the past

I ran across an interesting web site while looking for something else - Cinema Treasures, a site dedicated to old movie theaters.  I love the old theaters.

Here's the one that used to be at 95th & Beverly/Ashland.  I'd never pictures of what it looked like before its current use as a church.  Roseland and West Pullman used to have several: the Roseland, Parkway, and others.

This one in Rogers Park was demolished several years ago.  The Ramova in Bridgeport has been closed a long time, but is still standing.   Blue Island had the Lyric.   My first loss was the Valencia in Evanston, a vintage gem with twinkling lights in the ceiling.  I saw that one demolished in 1975, and a bland high rise office building was built in its place in 1976.  Don't even get me started about the Uptown. 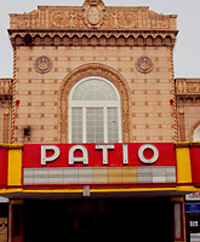 The Patio on the northwest side was recently reopened after being closed for several years.  They're having a fundraiser to upgrade to digital projection, since film prints are becoming harder to get and will eventually go out of widespread distribution.

Hyde Park had the Hyde Park, later known as the Harper, which is currently being renovated.  Those are the bright spots on this list.  I'm looking forward to that reopening at 53rd & Harper.
Posted by Fargo at 9:10 AM 2 comments:

can we get some help for these trees, please?

At a distance, this view looks so beautiful.  When you get closer, you see the results of years of neglect and unanswered 311 calls.

Over the last few years, most storms with high winds have brought down dead or weak branches or entire trees along this section of the Major Taylor Trail.  Each time, one or more people has called 311, trying to get the city to remove the fallen branches.  We've rarely gotten a response.  At least the smaller branches were easier to move.

The largest one, shown below next to my bike, blocked the trail and extended quite a distance across the grass.  A few 311 calls were made about this one.  On one call, I spent over 5 minutes trying to persuade the 311 operator that, yes, this is city property - CDOT property, not Metra, not park district, not forest preserve.  I spent more time describing the location in detail.   That effort was wasted.

A friend who lives next to this section of the trail ended up doing as he has in the past when trees have fallen and the city failed to hear them.  He brought out his chainsaw and cut the tree into pieces so that he could drag the behemoth off the trail and make it passable again.

Why should this location be a black hole for city services?  I understand that this is a ward boundary between the 19th and 21st wards.  Should that deny us any hope for ever getting decent service at this location?

As you can see from the photos, there are many years worth of fallen trees and branches here.  Several of the standing trees are dead or diseased. Some of them are quite large - large enough to kill someone if they're unfortunate enough to be nearby when these finally fall.  In yesterday's high winds, I was listening carefully while taking these pictures, just in case it might be the day for the next one to fall.

This section of the trail is used regularly by people walking to and from the Jewel, people running for exercise, people riding their bikes or walking their dogs.  Can we get some help, please, before someone is injured or killed by a large falling branch - or an entire tree?