Chicago Fire filming in the neighborhood on 9/1

If you live in or regularly visit the area from Western to Bell, 100th to 102nd, this may affect you. 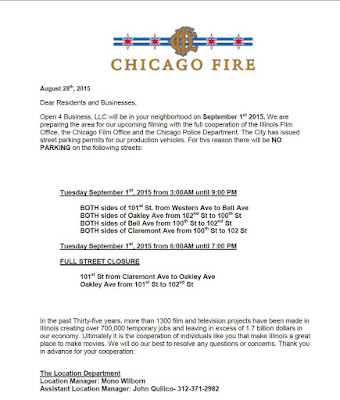 To the owner of a brown pit bull mix that was running loose along 97th today between Winchester and Seeley - I hope your dog is home with you now.  If this was a one-time thing, please be more careful. Please fix your gate or fence if that's what's needed.

If you keep letting your dog loose and not cleaning up after it, we will call animal control. Loose dogs are NOT good for the neighborhood.
Posted by Fargo at 6:06 PM 1 comment:

Thanks to Cook County Commissioner Stanley Moore for his efforts to secure a contract with the Bike and Roll  bike rental company that recently started a rental operation in Dan Ryan Woods. Commissioner Moore has worked to create more recreational opportunities in communities of color.

“It is critical that we continue to push for recreational programs on the Southside of Chicago. Cycling is a fun outdoor activity that will attract residents and better connect them to our forest preserves,” said Commissioner Moore. “The Dan Ryan Woods is a widely used forest preserve that should have as many amenities as possible and by providing a bike rental option, residents can have a unique experience that helps them explore our natural open space without traveling far from the inner-city.”

Up to ten bicycles will be available at Dan Ryan Woods for hourly or daily rental with credit, debit and prepaid cards. Rates begin at $7 per hour or $28 per day. Options include kids bikes, tag-along and wagon attachments, baby seats, and small and large quadcycles. You can find the rental concession near the parking lot on the north side of 83rd St. between Western and Damen, close to the north end of the Major Taylor Trail.

I've written recently about bike safety and sharing the road safely. On a recent evening I was riding home from the train station, trying to do just that.

I rode away from the Metra station and came to a 4-way stop. A driver approached on the intersecting street. We stopped at the same time. I yielded to the driver to my right, in accordance with the law. After he went, I entered the intersection. I was in the middle of the intersection when the next driver started from my right, as I was about to roll in front of his car.

I had to yell "STOP!" at the top of my lungs to bring him back from his distracted state. He hit the brakes and said "Sorry!" I was glad to leave the intersection without any collision.  It was still daylight. Visibility was not an issue.

We all need to pay attention in traffic, whether we are drivers, cyclists or pedestrians. This kind of encounter happens every day.  If we're lucky, we all get home without injury.
Posted by Fargo at 9:02 PM No comments:

Friends of the Major Taylor Trail meeting on Wed. 8/19

Shakespeare in the Parks is coming to Ridge Park. Chicago Shakespeare Theater brings the Bard to our park and many others. This year's traveling production is a mash-up of scenes and characters from popular works, including Romeo and Juliet, Macbeth, The Taming of the Shrew and As You Like It. 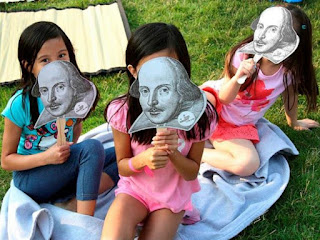 Are you familiar with Chicago laws related to bike and pedestrian safety?

Illinois is one of many states requiring that drivers leave 3 feet or more of clearance when passing a cyclist.  Most states now have anti-dooring laws, which hold vehicle occupants (driver or passenger) liable if they injure a cyclist by opening vehicle doors into the cyclist's path of travel. Chicago also has laws holding drivers responsible for causing cyclist injuries by turning left or right in the cyclist's path.

It's not a bad idea to review Illinois Rules of the Road once in a while.  Lots of folks seem to forget one of the most basic concepts: right of way.  See p.22: "When two vehicles on different roadways reach an uncontrolled intersection at the same time. The vehicle on the left should yield to the vehicle on the right."  This is true for cars AND bicycles, for uncontrolled intersection and 4-way stops.

p. 40: bicycles. "When a motorist is turning left and there is a bicyclist entering the intersection from the opposite direction, the driver should wait for the bicyclist to pass before making the turn. Also, if a motorist is sharing the left turn lane with a bicyclist, stay behind them until they have safely completed their turn."  A collision when a left turning driver hits a cyclist (left cross) from the side - or cuts them off - can also result in very serious, life-changing injuries. Please be aware of ALL nearby traffic when making a turn.

If you're on a bike, sometimes it's safer to wait for the next green light rather than zipping through on a yellow light. Some left hook crashes could be prevented by waiting. Crashes from this type of scenario can be especially hazardous to the cyclist because riding speed/speed of impact is likely to be high, greatly increasing the risk of injury.

"If a motorist is turning right and a bicyclist is approaching on the right, let the bicyclist go through the intersection first before making a right turn. Remember to always signal when turning."  A collision when right-turning vehicle cuts off or collides with a cyclist is called a right hook. This is one of the most common types of bike crashes and can result in very serious injuries, especially if the cyclist ends up getting knocked underneath the vehicle.

"At night do not use high beams when you see an oncoming bicycle rider."  Most of the time there is no need for high beams in city traffic, but I see them (or poorly aligned headlights) all too often in the neighborhood. These can temporarily blind an oncoming person on a bike, rendering them unable to see hazards for a short time.

If you're a passenger in a taxi, you can be held liable if you cause injuries to a cyclist by opening a car door into the cyclist's path of travel. Here's how to exit a cab safely.

When pedestrians are attempting to cross a street in a crosswalk or at an intersection, let's yield as much as possible whether we're driving or riding bikes. A more pedestrian-friendly neighborhood means better quality of life and more vitality in our business districts.

If all of us make an effort to be more aware of what's happening on the streets around us, whether we're driving, riding a bike, running or walking, we can all be safer and improve the odds of getting where we're going safely.