A set in honor of Charlie Watts. RIP.

A different side of Charlie Watts

UPDATE: Since this was first published in August of 2017, I've seen a marked difference on 97th and Longwood and at 99th and Walden. Drivers are stopping and yielding much more often, at a rate I never would have imagined 10 years ago. It's still not perfect, but it's a huge improvement.

Another thing that's changed in that time is the addition of Nicky's at 105th and Western. They've been busy, and limited parking often hurts them. This is another reason to consider adding a pedestrian refuge island on the north side of the intersection.

The challenge of safely crossing our major streets continues, with minimal assistance from our alderman. The addition of signs by the crosswalks at 97th and Longwood and the restriping of the crosswalks has helped a little. Now a few drivers are stopping and yielding to pedestrians crossing to/from Ridge Park instead of none at all. Many people need to cross here - folks with young children going to the playground, people walking their dogs, or anyone else using or passing through the park. For some, difficulty in being able to cross safely means that they drive to the park instead of walking. This makes the problem worse.


If more people feel comfortable crossing the street in these locations, we could see a lot of benefits: more customers served at businesses without parking being an issue, reduction in speeding, reduction in crashes, people getting more exercise, more interaction between people in the neighborhood, etc.

Under current conditions, when a class is in session at Boot Camp Fitness, Horse Thief Hollow often loses potential business because nearby parking is maxed out. This happens every single week. We could create a safer crossing at 105th and Western to make it easier for people to walk or bike from the east side of Western.

Southtown Health Foods' parking is often maxed out, and overflow ends up conflicting with customers for Top Notch, with the result of people parking across the crosswalk and in other illegal spots. Improving crossing conditions isn't a complete solution here, but any reduction in parking demand can make a positive difference.


The strip mall on 95th between Oakley and Claremont (Chipotle, Chase Bank and other businesses) has always had a problem with parking and traffic. That's not a fun place to cross 95th. It's been steadily losing businesses in the last few years (Panera Bread, Athletico Physical Therapy and others). Parking is only one factor, but it makes a difference. Without a fair number of people walking or biking there, the amount of parking available isn't enough to support those businesses. I almost always walk or bike there, but I don't have much company in my choice of non-motorized transportation.

When I stopped to take the photo below, the parking lot was nearly full, and there was a line of several cars waiting for someone to back out of a space. The backup extended a few cars into the righthand westbound lane of 95th. There was enough traffic that a bus was trapped behind the line of waiting cars, and all the people on that bus ended up having to sit and wait for the parking lot jam to clear up. I had to wait several minutes for a break in traffic to be able to cross to the middle of the street to take the photo, and a few more minutes to get back to the curb. No one would even slow down.

95th St. fits the definition of a stroad - a wide street with higher travel speeds designed to funnel traffic. Stroads kill - not just pedestrians and cyclists, but people in cars, as mentioned in the linked article.

I've written previously about problems at 99th and Walden, adjacent to All Day Montessori, the 99th St. Metra station, Beverly Montessori and several nearby businesses. The lack of significant pedestrian improvements was a big missed opportunity when the streetscape project was finished last year. I've seen some improvement in driver behavior at that location since the project was completed, but I attribute that mostly to pedestrians insisting on their legal right of way and forcing drivers to stop. 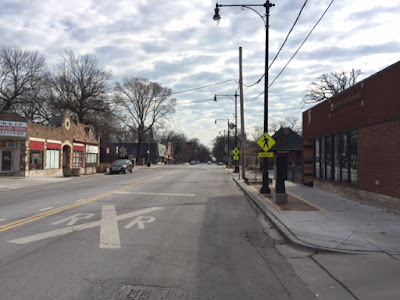 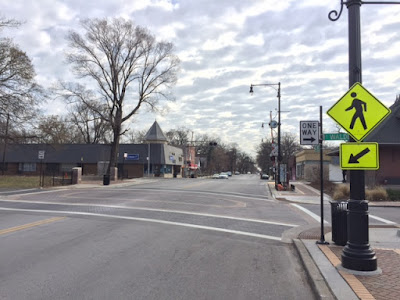 Of course, all the infrastructure tweaks in the world won't make a significant dent in the problem unless we get some enforcement on the speeding that is such a major problem on 95th, Western, 99th, 111th and other streets in the ward. We need ticket writing blitzes - in random places at random times - with no exceptions for off-duty first responders and special people. I appreciate those few drivers who do stop. The rest need an incentive.
Posted by Fargo at 1:11 PM 2 comments: