Save the Pike House If you've been missing the Beverly library on 95th St., you'll be happy to know that it's reopening after construction on Tuesday 6/7 at 10 a.m.

Here's the scoop according to Metra:


CONSTRUCTION NOTICE: Weekend track construction occurring near 107th Beverly for a crossing renewal, June 4-5. Weekend trains 202-322 and 205-221 may experience delays up to 10 minutes. 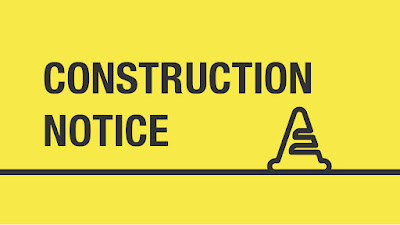 Looks like a good weekend to visit 99th St. 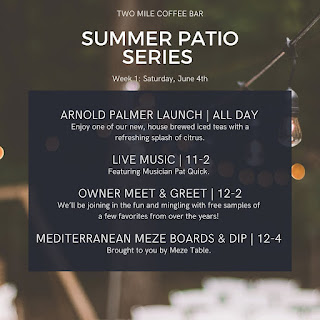 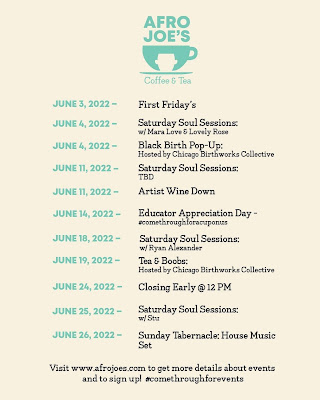 They will also accept clean styrofoam items (except packing peanuts). Eyeglasses will be accepted for reuse or recycling.
Donations are encouraged to help cover costs.

Block Club Chicago published a story about the opening.

Here's a local news piece about how car doors opening into traffic can cause crashes and injuries.

Click here for a web site with a lot of resources about preventing doorings (bicyclists struck by opening car doors.
Now that the weather has gotten nicer and more people are riding bikes, please be kind. Look out before opening your door into traffic. You could save a life.
Posted by Fargo at 7:51 AM No comments:

If you're nore familiar with Leonid and Friends, the band is a Russian-Ukrainian group. They like to cover Chicago, Earth Wind and Fire and other American bands with horns.

Did you order tickets for Sunday's BAPA home tour yet? This year they're featuring homes designed by the Hetheringtons, a multi-generational architecture firm here in the neighborhood. 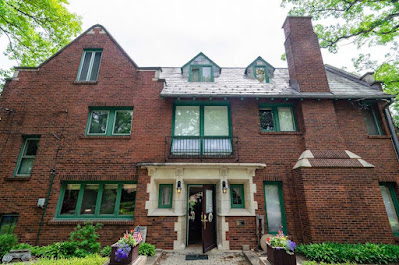 The first BAPA porch concert features the Leadfoot Band. It's happening from 6-8 pm on the Longwood side of Ridge Historical Society, west side of Longwood slightly north of 107th St. Bring your own chair. Swanson's Deli will have food for sale. There will be a limited amount of beer available from a local brewery for a suggested donation.

I know I'm not the only one who's tired of rain.

Divvy bikes and how to park them

Since the weather's been getting a bit warmer, I'm happy to see more people riding Divvy bikes around the neighborhood. The downside is that people don't always leave the e-Divvy bikes in the best places when they've finished their trips.

Plenty of blocks don't have sign posts. Other than bike racks, that's the best place to lock up away from a Divvy station. If it's feasible to lock up to a fence, that works too. I'm seeing too many left like this one, in the middle of a sidewalk. 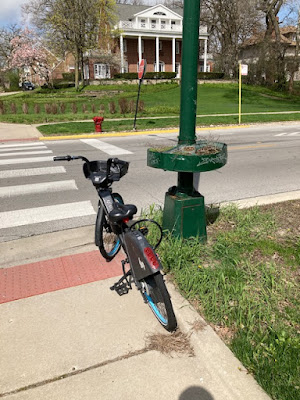 Divvy on sidewalk, 100th and Longwood

I've been hearing neighbors grumbling about situations like this. Lots of people use this crosswalk, and it's not very considerate to leave a bike in a spot like this. Also, a bike can get blown over and damaged in high winds. We've had plenty of those lately. 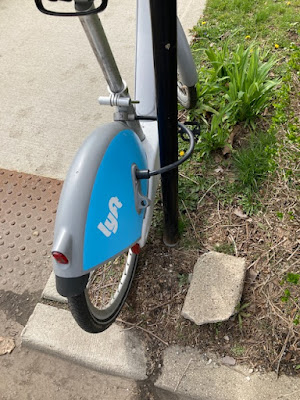 When I ride one home, I lock it to the stop sign on the corner. It's out of the way and secured so it can't blow over or get knocked over.

If you use Divvy, please be considerate and lock it to a publicly accessible fixed object (bike rack, sign post, etc.) when you're done with your trip if your destination isn't close to a Divvy station. If there is no good place to lock up, don't block the sidewalk.

Many of us have used and appreciated the Major Taylor Trail for years. Much of the pavement on the off-street sections is now about 20 years old and in need of some TLC.  Portions of the on-street sections are even worse.

Going north from 95th St., there are spots where the edge of the trail is crumbling away. Some spots have plants growing through.

From 87th St. to the north end and 83rd St. trailhead in Dan Ryan Woods, there are deteriorated areas in need of repair.

The on-street section from 97th to 105th has its challenges. It needs repairs as well as signage and pavement markings. There are a few utility cuts that have been left in rough condition - not such a big deal for cars, but a potential hazard for cyclists. 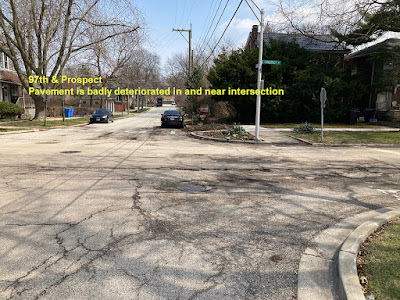 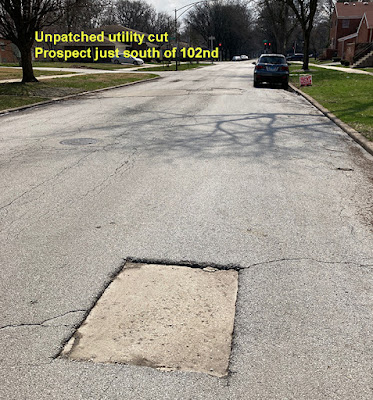 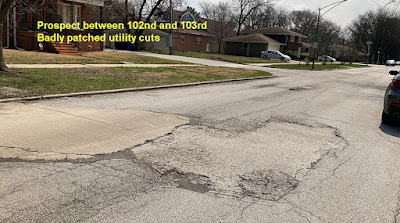 On streets anywhere in the city, crack sealer should be much more widely used, not saved for special occasions. 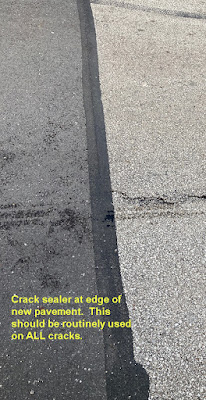 East of Vincennes, 105th St. has been a disaster for years and a hazard to riders, causing several crashes that I've witnessed. It's in desperate need of repaving. 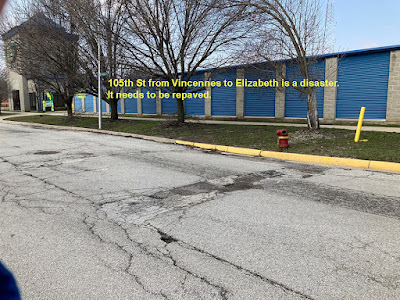 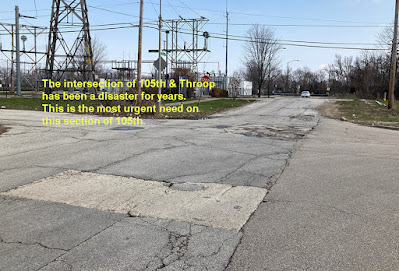 There are plenty of cracks and ridges in the trail surface between 105th and 107th. These will become very hazardous if not repaired within the next few years. 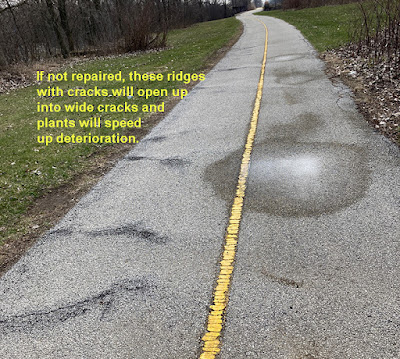 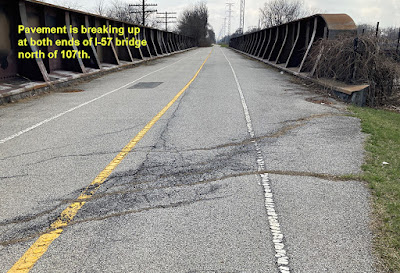 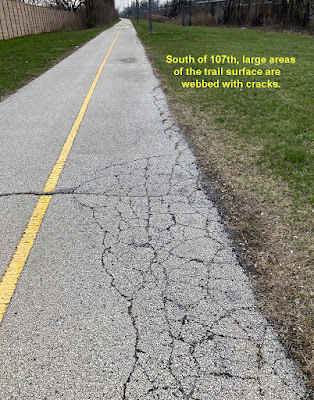 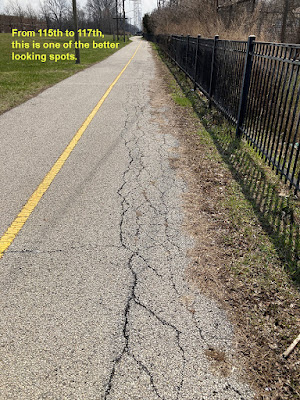 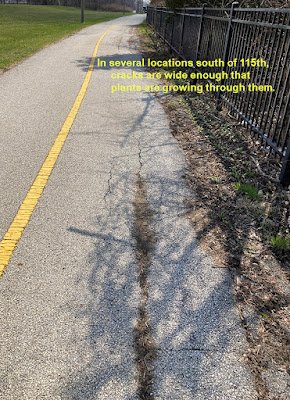 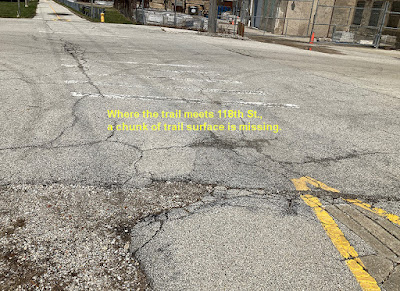 Just north of 119th where a fence was removed, the edge of the trail has crumbled away, creating a real hazard. 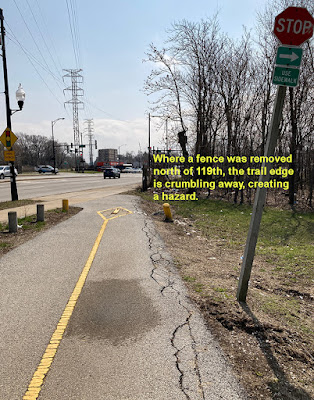 The trail has an on-street section from the Metra Electric tracks at 121st to a spot north of 122nd. It's been a cratered disaster for well over 10 years and is in desperate need of repaving. 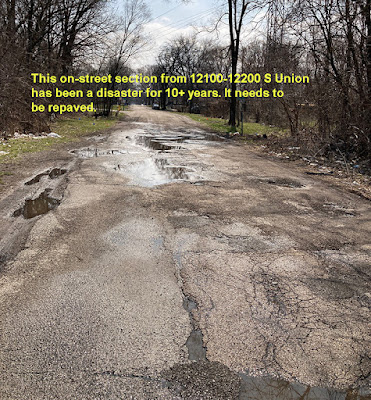 ADA curb ramps at 127th need some TLC, too. On the north side of the street, it's totally crumbled away. On the south side, the pads need to be bolted down again. 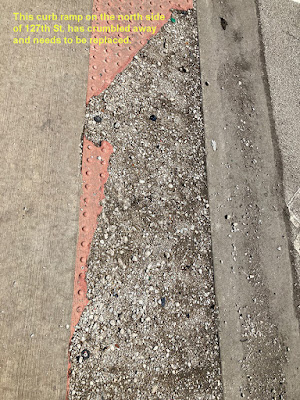 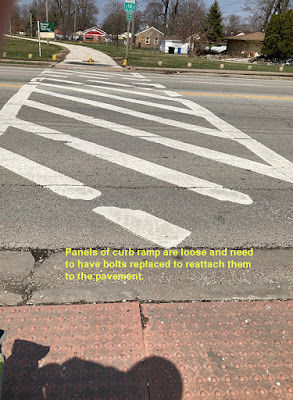 From 127th to the river, conditions are fairly good up to 128th Pl, then the trail condition gets rougher from there to the bridge. 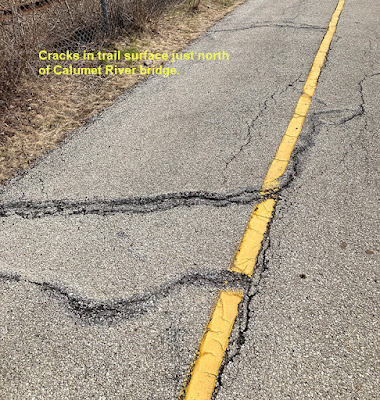 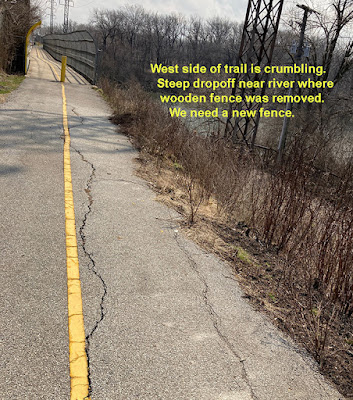 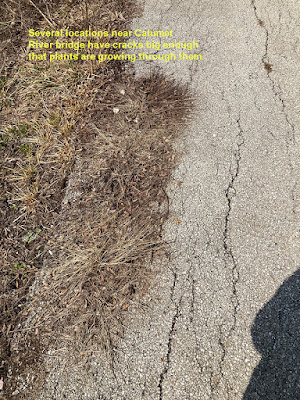 I hope that CDOT is planning on resurfacing in the near future and that they're coordinating with the park district and forest preserve district. This trail is a real asset to the city. It's used by more people each year - for walking, biking, jogging and other uses.  We all need to have safe conditions there.

We are having an Earth Day cleanup on Saturday 4/23, 9 am to noon - multiple locations.  We will meet up on the west side of the Jewel parking lot at 95th and Ashland, adjacent to the trail, and divide up into groups to work at additional locations. Here's a map link for the start location. Waiting on a train....a train-themed set inspired by a fun exchange of social media comments (part 4)

Waiting on a train....a train-themed set inspired by a fun exchange of social media comments (part 3)

A set by Irish artists...

A bit of Boston Irish

Major Taylor Trail events for 2022 - save the dates

Our next meeting will be 3/21 at 7 pm on Zoom. Please send email for Zoom link.

We are having an Earth Day cleanup on Saturday 4/23, 9 am to noon - multiple locations. Here's the signup link with more information.

Our annual fundraising ride is happening on Saturday 8/20. Here's the signup link with more info.

Variations on a theme - at this moment in history, it's a fitting tune.

Waiting on a train....a train-themed set inspired by a fun exchange of social media comments (part 2)

Waiting on a train....a themed set inspired by a fun exchange of social media comments (part 1)

CVS messing with us again

I don't know how many of you got this news today.

CVS has announced that they're closing their store at 111th and Western as of 2/21/22. That's one week from Monday.

That leaves us with the store at 103rd and Longwood, which will get nutty. The parking lot is already awful, even when there aren't a lot of Starbucks customers parking there.  It's one more reason why I don't envy the pharmacists working there and try to be kind to them.

A few tunes from an album of Tom Waits covers.

Labels: Foxes and Fossils, music, Simon and Garfunkel, the Bangles