Have you taken the BAPA survey about our 19th ward business districts?  If not, please do.

Most businesses on 95th and on Western can be reached by bike with a little creative navigation and many can be reached by walking, some of them quite easily. Getting across on 111th to destinations in Mt. Greenwood would be so much easier if we had bike lanes from about Washtenaw to Albany. Speeding drivers are a major problem there. Kedzie is even worse, because too many drivers try to run cyclists off the road there.  Even though Mt. Greenwood businesses there do have bike racks, I won't put them on the list due to the hazard of Mt. Greenwood drivers.

We've got plenty of bike friendly places to eat and drink in the neighborhood. If Cafe 103 was still around, I would have included them in the list. Jimmy Jamm is easy to walk to, and I hope the city will give us a bike rack there.

Bike groups do tours all over the city. When they hear about good restaurants in areas that interest them, they come. If they have good experiences, they tell their friends and they come back again. Neighborhood business districts in many parts of the city have learned this lesson. Why can't ours?


Businesses around 99th & Walden make their pedestrian friendly locations inviting. While sidewalk space along Walden is too tight for bike racks, having racks just around the corner on 99th works pretty well.  I really miss Blue Moon and wish we had a lunch and dinner cafe at that intersection.

Here's my list of biggest frustrations with our neighborhood restaurant offerings:

* not enough quality places open for dinner or on Sundays
* not enough non-Italian ethnic choices
* not enough variety in types of food offered (too much emphasis on pizza, sandwiches, burgers and not enough other choices)

There's so much untapped potential here.  Has there ever been any thought about doing an incentive program for building owners on 95th to improve the appearance of their buildings? Are there other long-term issues about the buildings themselves that have made them unattractive to mid-level businesses? Does anyone have an answer as to why the street level retail space in the new 103rd St. residential building east of the Metra tracks is still vacant? Is it an issue of rents that are too high for the neighborhood?

We've got a lot of good independent businesses in the ward that are worth supporting. Independents help give our business districts a unique character and make those areas destinations - for folks in the ward and from other parts of the city.  Let's give them our support and try to get more of them to fill the abundance of vacant storefronts.
Posted by Fargo at 12:25 PM No comments:

Two more oldies for your amusement.

If only I could say the same of the perpetual torn-up nightmare that is 95th St.  Will it ever get smoothly repaved?

I turned the corner onto 98th, walking towards Walden, and noticed "no parking" signs posted by Peoples Gas for the time period of 6/13 (today) through 6/23 (a week from Monday).

Why was there NO advance public notice of this project?  There was NO signage at 97th or 99th warning people not to go that way.  Huge fail for Peoples Gas and the ward.

I hope that BAPA or the alderman's office will get some answers and give us some warning if/when there are more gas line projects on neighborhood streets.  We've endured enough already with the never ending torture of the eternal gas main project on 95th, plus water main construction on 103rd and Wood.  How much more concurrent construction can we endure in a relatively small area?

In honor of Mother Nature's spring show - and the 24/7 robin partying happening in our yards right now - here are 2 versions of an oldie: the Jackson 5 from 1972, and the Bobby Day original from 1957.  Happy Friday!

Ald. Matt O'Shea and 22nd District Police Commander Daniel Godsel will discuss their work in the Morgan Park community. Representatives from several city agencies and departments will be present to address individual concerns from 19th Ward residents.
Posted by Fargo at 2:20 PM No comments:

Every few months without fail, a drain grate by the 95th St. Metra station gets clogged with mud and debris and Lake 95th St. returns, making it challenging for passengers going to and from the station and making the storefront at 1800 a less desirable space to do business.

The drain got clogged several weeks ago, undoubtedly due in part to debris from all the uncovered gas line excavations uphill from this spot. I've made a couple of 311 requests, without success, as you can see from today's photo. 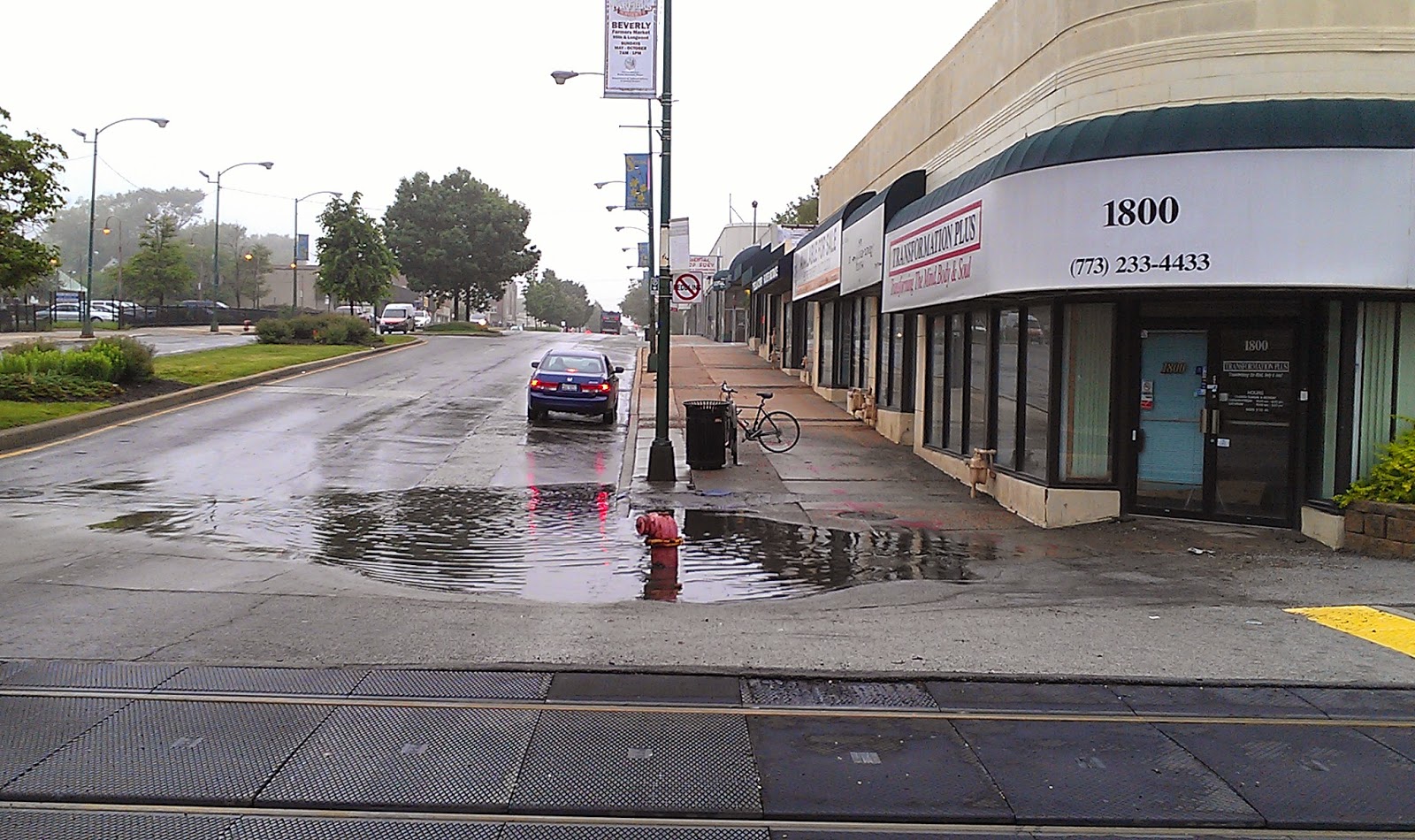 It looks a little smaller now than it did during last night's downpour, because so much water has been splashed in all directions by morning rush hour traffic. Last night when I got off the train, the water was nearly up to the door of the storefront at right, and touching the median at left.

I've seen this situation many times in the last several years, and 311 requests never get this particular problem solved. What's the problem? Why should it take emails and phone calls to the alderman to get it cleared?  95th St. does not seem to be a priority for our ward or for the 311 system.
Posted by Fargo at 9:16 AM No comments:

Starting today, 103rd St. will be closed to through traffic east of Longwood from early morning to about 3 p.m. each day.  Local businesses WILL be open.  Parking may be a little less convenient for a while.  If you can walk or ride your bike, please consider it.  After the hard winter, let's support our neighborhood businesses so they survive the added burden of construction.
Posted by Fargo at 12:17 PM No comments:

one bike rack is not enough

In recent weeks, it's been more difficult to get bike parking when shopping at County Fair (10800 S. Western).  There were previously 3 2-bike racks, providing space for 6 bikes (and perhaps 1 or 2 more, if folks are creative).  Two of the racks were removed, and I've gotten no complete answer as to why that happened.  I talked to a store employee yesterday, who said that one of the racks and an adjacent light pole had been hit by a car that ran onto the sidewalk. He didn't know why the other rack had been removed.

When I rolled up yesterday, one bike was already locked to the rack. I locked up to the other spot. Two more cyclists rolled up as I was locking up. They ended up leaving their bikes unlocked when they went inside. Another cyclist arrived and did likewise.


When I came out, the unlocked bikes were gone, replaced by 3 new ones, including one cleverly sandwiched into the middle of the rack. This volume of bike traffic to the store is not unusual.  Some store employees ride to work, so there should be room for them and for customers. With no parking meters or posts available, there is nothing else suitable for secure bike parking unless one wants to go a block or two down the street.

If someone is shopping by bike and concerned about the security of their bike, the lack of secure parking could result in some lost sales for the store. I value County Fair as a quality neighborhood store, so I don't want to see that happen.  My bike is one of my main forms of transportation, so I don't want to leave it unlocked anywhere on Western. This may not be a high bike theft area, but it does happen. I have no desire to see my bike become another theft statistic.

Do you ride your bike to County Fair? If you'd like to send a message that bike racks matter at this location, please submit a bike rack request here.
Posted by Fargo at 7:19 AM No comments:

On Sunday afternoon 6/8, Open Streets is coming to Blue Island for the first time.  If you're not familiar with the concept of Open Streets, it's been done a few times in Chicago.  Minneapolis is doing several events this year.  Portland and San Francisco are doing it, too.

It started with Ciclovia in Bogota, Colombia and became a big event in Medellin and other Colombian cities.  This inspired similar events in other cities around the world.

In Blue Island, Greenwood Street will be closed to vehicle traffic between 127th and 119th from 1:00 to 4:00 p.m.  The street will become an activity space for walking, biking, skating, dancing and other forms of fun.  Click here for info.

I'd love to see an event like this happen in the 19th ward.
Posted by Fargo at 6:37 PM No comments:

Recently I've seen more folks getting out and about in the neighborhood by bike - a sight I welcome. The downside - some appear to be newbies who don't quite understand how to use the longer wave-style racks that we have in some locations.  The fact that the 10-bike rack in front of the public library on 95th is incorrectly installed (too close to the wall) doesn't help.  In most places, racks are correctly installed with enough space to use them as designed.


Yesterday I was trying to park my bike on 95th St. and was disappointed to see the bike in the above photo blocking 4 out of 6 available spaces on the rack where it was locked.  Someone could have locked another bike parallel to this one, limiting the rack to half the capacity for which it was intended.  These racks are designed for the bikes to be parked perpendicular to the rack, not parallel.

This is how you do it.

Note: for a 2-bike rack, either way is okay, but parking perpendicular can allow a 3rd bike to be locked over the top of the rack - a common practice in places where demand for bike parking is high.

I also see lots of folks locking their bikes in such a way that even an amateur bike thief could easily take them. I don't want to see anyone lose their ride for such a preventable reason.  Here are a few pointers to help keep your bike secure.

1. Don't rely on a cable lock to offer real security. They can be easily cut with bolt cutters and then your bike is gone.

Bike theft is not as big a problem in the 19th ward as in some parts of the city, but it does happen. I hope that your bike stays yours and doesn't become a statistic.

Ride safe and have fun!
Posted by Fargo at 6:34 AM No comments:

2013 vehicle stickers will expire on 6/30/14. You can also buy stickers online at www.chicityclerk.com.

To ensure a smooth transition to the new year-round sales schedule, residents are now REQUIRED to bring the following:

This will ensure your eligibility to purchase and speed the sale process.

Note: senior citizens will remain on a June to June expiration cycle.
Posted by Fargo at 9:25 AM No comments: