Variations on a theme... There are so many great interpretations of this classic tune that it's tough to pick only a few.

Earth Day workday on the Major Taylor Trail on Sat. 4/22

Tomorrow (Saturday 4/22) Friends of the Major Taylor Trail will be having a trail clean-up workday to celebrate Earth Day and get the trail ready for the season.  We will meet at 9:00 a.m. by the mural -  where the trail meets 111th St. (approx. 1030W) and work until around noon. 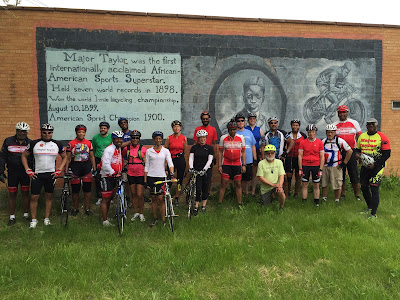 If you plan to join us, please RSVP at one of the links below, so that we have an idea how many volunteers to expect. If you have questions or aren't on Facebook or Chainlink, contact us by email. 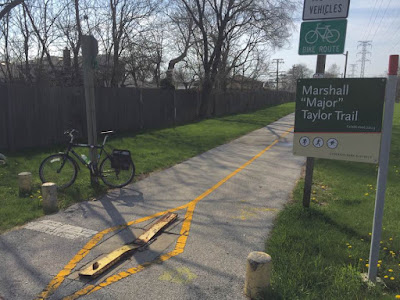 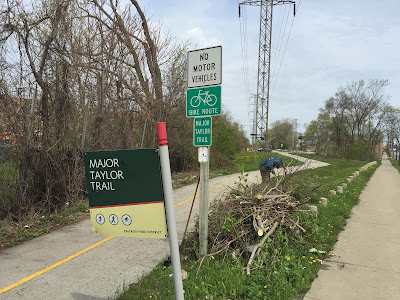 We hope to see you on Saturday. There's plenty of tree trimming and trash pickup to do.

Music for a sunny day

On my way home yesterday evening, I found this problem solved. The stop sign at 98th and Longwood is now on a new pole of appropriate height, so the sign is well above head height for anyone except the tallest of NBA centers. Thank you CDOT! 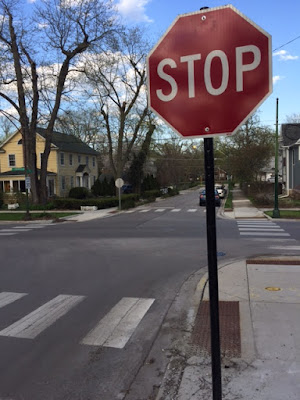 He said that, with the new ornamental light poles used in the streetscape project, the city doesn't attach street signs to those. The normal process for attaching street signs to light poles (tightening a metal band around the pole) could potentially damage the ornamental poles, so they use signposts in these locations instead.

I pointed out the problem with the too-low signs at 99th and Walden (blocked by ped crossing sign for eastbound traffic). I asked if they could install a taller pole. He said they don't have them that tall and would need to add an extension to the existing pole.

I also mentioned the face-height stop sign problem. He said that someone had reported the location as 98th and Walden. He went there and couldn't figure out what the problem was - because there is no problem at that location. I told him that location was incorrect and gave him the right spot. He said he would go to 98th and Longwood and check it out. These fixes may not happen immediately, but at least someone at CDOT has it on their radar now.

At 98th and Longwood, we have this winner. The sidewalk is not exceptionally wide here, as illustrated by the bike and construction horses. The previously pole was closer to the curb. When the ADA curb ramp installation was done, they used a much shorter pole for the stop sign. I'm 6'1" and this sign is now at face height, as illustrated by the selfie below. Large signs like this should be well above head height. For safety, the bottom of this sign should at least 1 foot higher than it is. To make it worse, this too-short pole is set into the new concrete. 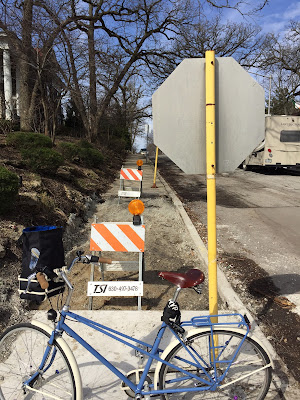 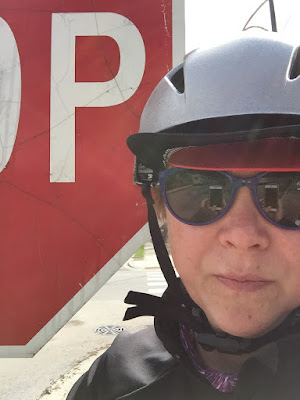 At 99th and Walden, where the old light pole at the corner was recently removed after completion of the streetscape project, the one way sign and street signs were placed on a pole short enough that they are mostly obscured by the pedestrian crossing sign and light pole in front of them. 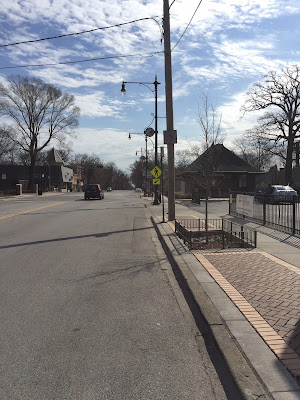 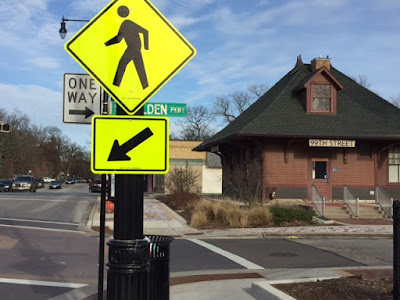 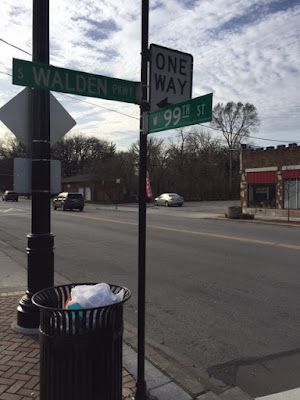 We have another bit of brilliance at 99th and Wood, also related to the streetscape project. The old street signs at this corner were rather faded. They were mounted on an old light pole that has been removed. The new light pole slightly east of the corner. The one way sign and street signs are now mounted on a sign pole, like the ones at 99th and Walden. In addition to being so low that they're easily reachable, the pole is in line with the west side of the building, so that the building obscures the signs until one is right at the stop sign.

Someone has obviously messed with these already, as they are rotated out of position. Is it too much to ask for people to actually use their brains when installing signs, to look at context and place the signs so that they serve their intended purpose effectively? 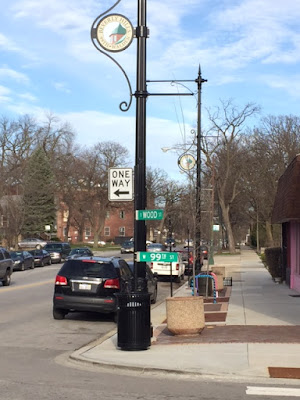 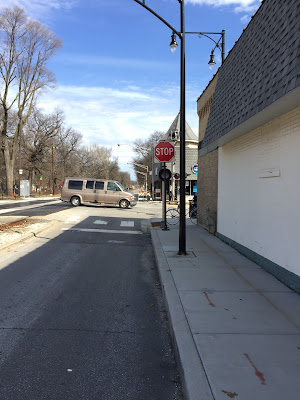 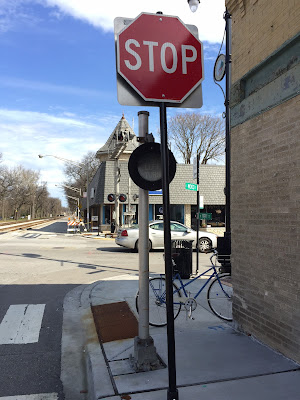 I wish this was an April Fool's Day joke. Sadly, it's not. How long will it take to get this fixed? Can CDOT stop doing this? Time will tell.

I've enjoyed Laine's Bake Shop since this lovely small business opened its doors in Morgan Park last year. Their peach cobbler is a special favorite. This week's news about relocation of the business was a disappointment.

I'm glad that the business is growing, but I will miss my easy bike ride to their soon-to-be-gone location near the post office in Morgan Park. Once they open in their new Pullman location, I guess this will be another good reason to ride over the Pullman.
Posted by Fargo at 9:59 AM No comments:

a plague of noise

I recognize that we have a lot of green space in our community that needs maintenance. However, landscape businesses and individuals need to be aware that Chicago has a noise ordinance. It exists for a reason.

11-4-2900 - Between 8:00 P.M. and 8:00 A.M., no person shall generate any noise on the public way that is louder than average conversational level at a distance of 100 feet or more, vertically or horizontally, from the source.

On our street, Beverly Environmental has been a frequent violator of the noise ordinance. This morning was the worst yet - being blasted with the hellish sound of leaf blowers at 7:15 a.m.

Is it unreasonable to expect landscape businesses to comply with this ordinance and avoid disturbing the peace with extremely loud noise before 8:00 a.m.? I don't think so.

If you hire one of these businesses, please be considerate of your neighbors and instruct them NOT to show up before 8:00 a.m.
Posted by Fargo at 10:47 AM 2 comments: