walking and the health of our neighborhood

Walking to a train or bus, park, school, business district or library, walking a dog, or just plain walking, isn't just a way to get around. It's a way to build community. We can observe many things we would not see from a car, have random conversations, meet new people, see nature or otherwise have a richer experience than would be possible inside a vehicle. Driver behavior can have a major impact on the quality and safety of that experience.

I'm always glad to see parents walking with their kids, or kids walking on their own. Kids learn so much by walking in a neighborhood - navigation, decision making skills, street safety, etc.  Bad driver behavior can have a negative effect on them and their parents and make our neighborhood less family friendly, contrary to the image it seeks to project. A driver-centric neighborhood where kids and parents don't feel safe crossing the street is not healthy for any of us.

One would think that the enhanced crosswalk and new signage at 99th and Walden might encourage drivers to at least slow down or, better yet, obey Illinois law by stopping and yielding to pedestrians trying to cross 99th St.  A surprising number of drivers appear to be completely ignorant of the law, or choose to disregard it. To quote a brief portion:


Passengers from a Metra train were walking towards the intersection around 5:45 p.m. I was among them. There was a brief break in traffic on 99th. I stepped into the crosswalk and encountered a group of about 10 coming towards me - moms and kids leaving All Day Montessori on the north side of the street. A driver in an SUV was yelling at them, saying they weren't entitled to cross there because they weren't at a stoplight. As they reached the middle of the street, the driver continued to yell as she started creeping through the crosswalk behind them. She resented the fact that the moms had stepped out and forced her to stop, perhaps delaying her by 30 seconds. 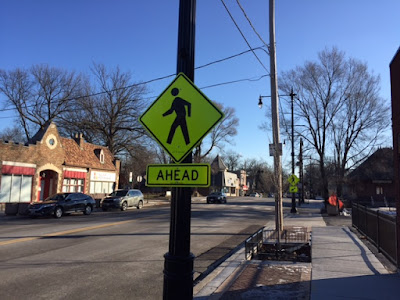 We have 3 pre-school locations around this intersection (2 buildings for All Day Montessori and 1 for Beverly Montessori), generating a lot of traffic at morning and evening rush hours, in addition to traffic around the Metra station and adjacent businesses. The intersection would be much safer if more people would walk or bike to/from nearby destinations instead of driving. I recognize that this is not always possible, but whatever we can do to reduce car traffic and share the road in a more considerate way can improve conditions for walking.

Pedestrian stings with real tickets, and perhaps traffic school, are needed in our neighborhood.  Enforcement should be applied to everyone, including off-duty first responders, who can be a big part of the problem. This may not be a popular opinion here, but the hypocrisy of first responders driving recklessly and making their own neighborhood less safe got old a long time ago.

If we work together as a community, we can make a difference. We can each set a positive example by yielding to pedestrians when we drive, and we can ask drivers to stop when we have the right of way as pedestrians.
A neighborhood where more children (and everyone) can walk safely is truly a family friendly neighborhood.  A car-centric neighborhood? Not so much.

First of all, that driver seriously needs to chill! Second, for all of the beautiful streetscape work that has been done in some of our business districts, none of it is really intended to help change behaviors. There have been no road diets, no curb bump outs, nothing of the sort. All the brick pavers and planters in the world won't convince people to walk in a place that is fundamentally unsafe and unpleasant for pedestrians. While I agree that people need a better understanding of crossings, if we had roads that didn't encourage bad driver behavior in the first place, there would be less need for ongoing education and enforcement. Get the road and sidewalk dimensions right first to send the message that walking is welcome. Then move on to the cosmetics.

I agree. I was disappointed that the 99th St. streetscape plan did not include any curb bumpouts, speed tables or other measures that would encourage the kind of unsafe driver behavior described here.